The Crafting system, and the crafter class in particular, is a vital part of the economy of Camelot Unchained. Crafting will be central to the economy[1]. Crafting is a means by which to take raw materials, purify and shape them into useful objects. With these materials, crafters can make weapons, armor, and trinkets. Players can also salvage materials from old or broken items or make repairs to them, though some of this can be done by any class, and constitutes the lighter form of crafting, known as "popcorn crafting."

The classic crafter stations have been replaced with a single station called the Vox Magus. This station is a magical station and reinforces that crafting is achieved through magic. The Vox Magus allows for use of apprentices, and a performance to happen with multiple people during the crafting process.

Though technically a part of crafting, Building is vastly different from crafting and has its own page.

A duck doing some etching

The following is a direct quote from the Crafting Document Part Deux[1]:

The Guiding Principles
We must support both "popcorn" crafting (simple crafting/repairing) as well as a full-time crafter class
We MUST create a vibrant economy that ensures that the crafter class plays a key role in the game's economy
With no Auction House, we must design the class so they have time to do the social stuff as well as actual crafting and build support systems to help
Crafting is magic! Abandon the "nod, nod, wink, wink" and embrace magic being at the core of all crafting
Use a singular interface for all crafting but customize it for each Realm. Use of this interface cuts development time and resources overall but allows us to "go to town" on the main interface
System must be designed with a long-term view. Crafters must be able to make a profit throughout their lifetime but we also must make sure to prevent/slow down "Mudflation" through use of mechanics such as item decay, repair costs, fees, slower item creation, etc. 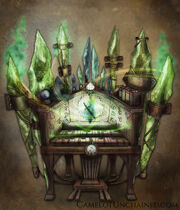 The Crafter does his work through the Vox Magus. This replaces a traditional crafting station such as an anvil, furnace, camp fire, or alchemy table; all crafting is done through this device. This device is going to be upgradeable and customizable to the specific needs and wants of the individual player, or the needs of the guild.

The Vox Magus has a limiting mechanic called Vox Power. As power gets used the Vox Magus becomes less efficient. The Vox Power recharges over time, but it will be possible to use a reservoir of power. Vox Power can be upgraded though the purchase of crystals.

For the crafter class, upgrading is considered similar to the equipment upgrades and of a combat class, and will have its own form of progression.

The process of crafting is an in-depth and extensive[2] 6-step process. Taking, purifying, shaping, making, repairing, and finally breaking. Each step is meant to be a meaningful, fun and interactive aspect of crafting. Becoming a top tier crafter will take a significant time investment[3][2]. 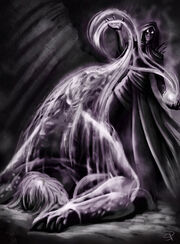 Realms at a current disadvantage may have their materials regenerate faster than normal. Souls can be taken from enemies slain and used later in the making or shaping stages[6].

Purifying is the step of changing a raw material into a material suitable for crafting. This step will be more interactive than the taking step with a mini-game; this mini-game will not be simply "connect three". From this process, players will not only receive the pure material, but also impurities and by-products, which can be used in other crafting projects or for class abilities.

After purifying, the raw materials will go into the Vox Magus and the player chooses other reagents to add. Before starting the purifying process, the player will have several bars to adjust to their needs or desires for the end product:

Once the player starts the process, they can make adjustments during the process. The player can adjust the reagents, the power, and can have other crafters come in and contribute.

Shaping takes the purified materials and starts shaping them for final use within an item. You will be able to blend materials into alloys. These Alloys will have characteristics of both materials. Steel can be made from iron and other reagents, but steel in turn can also be used in other mixtures to create a new alloy.

The effect of Alloys will be dependent on the materials used. However, Armor may be more or less resistant to fracturing, temperature, or even physical stimuli. Items may gain a slight luminescence if the right materials are used.

Shaping is not a recipe system, it is combining two or more materials to make a material for the making step. Materials plus alteration steps will make the final product; not two bars of iron, one hunk of carbon gets you a steel bar. This is intended to give control over the final form of items to the crafter.

The E.A.R.S. engraving system will, besides looks and resistances, add some visual procs

This is the actual step of creating of an item, from Weapons to Armor and Siege Equipment[6] for use with the crafter or other characters. For this step, the Vox Magus can work both in a supervised mode and an unsupervised mode; both modes may work online and offline. While making an item, blueprints can be created to make recreation of well-designed or unique[9] items easier. The blueprint will allow for some level of automation.

If you have captured enemy souls you will be able to imbue the soul into the items created. Using the E.A.R.S., the player will be able to customize and add special features to your items. When a resistance is activated, the armor and runes will light up<REF="EARS">The Engraving And Reaction System</REF>. In this step, the player can add a special mark to identify that this is their creation[10].

Catastrophic failures will be low, as will critical successes[9].

With repairing, the player can take broken items and repair them or re-forge them into newer items.

Scavenging and salvaging items, either broken, old, or just not needed, will allow players to get materials that were used in its creation. For unbroken items, the player will be able to get a blueprint of the item and the materials. To some extent, non-crafter classes will have a certain amount of access to this ability.

With a higher breaking skill, the crafter class will be better able to recover materials, including from catastrophic failure[9].

Players who craft can act as merchants and set up a store to buy and sell goods. These stores will be a kind of secondary housing for the character who owns one. A Vox Magus will be able to be set up in the store. Stores may be available only to the crafter class, however the license will be available from the Realm. Licenses will not be purchasable, these rights need to be earned from the Realm. Stores will be in special zones made for them to create markets, these will be in safe cities to start but may spread through the world as time goes forward. Players will be able to add signs and decorations outside, and the inside will be highly customizable, as well.

Caravans will be hired to run goods from one place to another, and are designed to move heavy goods. Crafters will no longer be able to rely on their carrying capacity to get goods from one place to another. These Caravans will use giant creatures as the beasts of burden, and will be loaded up with goods and directed to go somewhere in the control of the Realm. These caravans can be told to follow a route, or can be directed by a player. Because these Caravans will be going through areas that potentially have other Realm members looking to raid them, you can purchase insurance to protect your investment, or hire players to guard them along the way.