PvE (Player versus Environment) in Camelot Unchained has some very unusual aspects for an MMORPG. Because the game features a horizontal leveling system that is RvR-focused, some think that there will be "no PvE", but in reality there are plans for a lot of PvE content, albeit with unusual aspects such as absolutely no PvE progression.[1]

Camelot Unchained will have all kinds of NPCs (non-player characters) to kill, summon/capture or talk to - guards, animals, NPC helpers, spirits, pets...there will be dungeons and big monsters guarding important places or being killed for meat, scale or fur, just it will all revolve around RvR.

This is what will NOT be in Camelot Unchained: 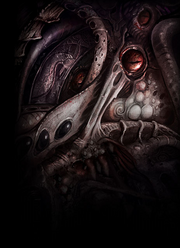 Something, in The Depths...

In this game, to make an "epic" sword you will, besides rare and/or expensive materials, have to find a highly skilled crafter - these will have their own class and leveling system, and you will likely be expected to pay for their services.

Best anvils and materials will be either in the enemy territory or in The Depths - which will often be the same - and besides waiting for it`s gates to open to your Realm, escorting crafters and fighting might be necessary. Swords, same as other items, will decay over time thus occasional repairs will have to be paid for. 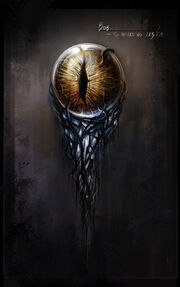 Q: Will there be other dungeons besides The Depths?

Mark Jacobs: Oh, I hope so. I love The Depths, I love the concept, I love Darkness Falls (the RvR dungeon in Dark Age of Camelot) and what we are doing here is even better.[6]

Renée Machyousky: Yes. You are going to sleep like a babe now, aren’t you Aylwynn?! [8]

Mark Jacobs: Crafting is going to be very time consumptive if you want to be great at it. I'm not too worried about crafter bots.[9]

Q: Can crafters differentiate their armor/weapons from other crafters either through design or branding?

Mark Jacobs: Absolutely. Crafter's marks are confirmed for the game and we are working on a system to add more than just stats to different items.[10]

Q: Will there be no PvE in the game at all? No NPCs, really?

Mark Jacobs: There will be NPCs of course (as I’ve stated before) since towns need citizens, structures need guards, crafters need leather, etc. The world won’t be empty but NPCs will not be dropping tokens, items, etc. However, you will be able to scavenge/skin/etc. materials from them of course but again, not items, tokens, etc.

There is also a difference between PvE-NPCs (cows) and RvR-NPCs (guards, human or otherwise) but no item or token drops. I also promise that there will not be PvE expansions with new tiers of gear drops that become required to complete. This game is a RvR-focused MMORPG and will remain such.[4]

Q: The "RvR only, no PvE leveling or loot" thing. I'll have to wait and see, but so far my imagination can't come up with an enjoyable game set up like that. PvE content has a valuable role even in PvP focused games. Will there not be any creatures or monsters or anything in the world or what purpose would their existence have if they don't drop look or have any quests associated with them? And without PvE will there be enough story focus?

Mark Jacobs: We will, of course, have to have some NPCs in the world otherwise it would feel empty, lifeless and barren and we can't have that. However, having NPCs and having NPCs that drop loot, exp...are entirely different things. [3]

Mark Jacobs: Another thing to keep in mind is that this is going to be a big world. The smart Realms will go out and build forts, towers, keeps, etc. And the purpose of those will be to help keep the settlers and their homes safe. Again, think big spaces, very limited insta-travel, etc.[11]

Mark Jacobs: Mines are going to be one of the primary sources of materials for builders. They come in all shapes and sizes and they are filled with various raw materials. Players can enter these mines and gather the materials; they can also dig shafts looking for new veins. Unlike mines/nodes found in most MMORPGs, these mines are not meant to be mined out quickly by one or even a few players. Additionally, to help encourage realm pride, we will design these mines to be mined cooperatively by players. Think of the gold mining scene in the film “The Hobbit – An Unexpected Journey” for reference. [12]

Q: Will housing consist of a plot system, claiming a square of land that you can build on, or more of a free form, where you could actually build your own house around someone else’s building?

Renée Machyousky: In open areas (which will be most of the world) it will more or less be choose your own adventure, with obvious limitations for steep terrain, structures already in place, etc. In the safe zone there will be plots that you can claim/purchase and once you do so, others will not be able to build there while you own it.[13]

Mark Jacobs (answering/commenting in the Kickstarter chat): Glad to welcome you back from the PvE-side. You are not alone, I suspect a lot of people migrated the same way because frankly, player PvE games are easier, simpler and more rewarding in the short-term because of the whole "Ding Gratz" bit. I know that if we can create a great RvR-focused experience that many players such as yourself will return to their PvP roots.[14]

Q: So no PvE leveling, but will there be big monsters in the world that you need your Realm mates to help bring down, for rare crafting materials? (not tierred raiding, more open world raiding like DAoC had) will you be able to skin those monsters and put them in your house as trophies? (insanely fun part of DAoC)

We know there is a ton of crafting for downtime, but sometimes you just want to go through a dungeon with friends (even if its out in TDD territory and there's a danger of being hit from behind, or other groups already being in there!)

Mark Jacobs: Our plan is right now that in The Depths, the big NPCs will be guarding access to certain areas that will yield lots of good stuff for the side that controls it. Some of these could also yield scavenged/skinned materials but they will not have drops or anything like that. [5]

Mark Jacobs: We will look at adding a lot of randomness to the environment in terms of how not only it evolves over time naturally but also how the effects of magic that the players inject into the environment can also affect it over time as well. The landscape should change not just because of seasons (which would, IMO, be a good addition to this game) but also because the players are throwing around the equivalent of small, tactical nuclear devices like guests used to throw rice at wedding receptions.

We will try to incorporate the consequences of summoning and tossing around so much power into the game in order to throw, every so often, what amounts to a curveball (or would that be a curvefireball?) at the players.  This could manifest in all manner of ways including creating temporary “dead spaces” where magic might not work or maybe areas where magic works just a wee bit too well. It could also mean that the geography of an area could suddenly change or even that certain beings might manifest themselves within the world quite unexpectedly and with rather interesting results.[15]